Early Saturday morning September 23, 2017 over 125 book vendors gathered at Riverside Park along the Rappahannock River for the second annual Fredericksburg Independent Book Festival. Authors from all over the state participated, which provided a wide variety of genres from which readers could choose. A food truck pulled in to feed the hungry masses, and panel discussions on various genres were held throughout the day.

The book festival was held in conjunction with the city’s annual sidewalk sales, just one block away. These events pulled people into the city and the amount of energy created was amazing. I loved watching the trolley tour pass by, each one full of visitors to the city.

Within the first three hours of the festival, the organizers announced they had already doubled last year’s total attendance. Needless to say they were very happy.

I learned a lot about outside exhibiting and will do a better job next year. Instead of borrowing a 10 x 10 canopy tent, which was a pain to put up, I will purchase a 6 x 6 that will be much easier to handle and assemble. I will get there really early to get a parking spot near the event, and bring only a few books to the table, leaving the rest in the car if needed. I did plan ahead and brought my lunch in an insulated bag, so I didn’t have to leave my table to stand in line at the food truck. Other vendors near me wished they had done the same thing.

It was fun to meet other authors, and talk to readers as they stopped by my table. Even those who were not interested in mystery books, stopped and commented, “I love your cover.” I agree. I do, too.

Are you a Plotter or Pantser?

I’m both. I dutifully outlined my first book, An Unexpected Death, because that was what I thought I should do. But when the characters were developed and decided to take over and change the plot lines, my outline became obsolete, and I became a Pantser.

What’s the difference? A Plotter is someone who outlines the entire book, which provides them with a road map of how the story will flow. A Pantser is someone who hovers their fingers over the keyboard (or has pen and paper at hand), and just starts writing, letting the words, characters and plot lines develop.

For my second book, Fatal Dose, just released, I decided to be a Pantser. When I had a couple of plot ideas and character bios written, I sat down and typed.

It didn’t work. I spent too much time going places with the book that resulted in dead ends. I had to backtrack, cut out a lot of text, and start in another direction. It was very frustrating and cost me a lot of time.

In starting the third Caitlyn Jamison mystery, I am back to being a plotter. The outline is in three acts, with scenes within each act. Each character action is delineated by a bullet point. I am able to move the characters through time and actions in order to get a good flow for the story. As I drill down into the scenes, I’m able to move things around if they no longer fit. If I need more information about something I put that issue in bold font within brackets. At the end of the document I made notes about the plot lines and characters. One issue I need to work on is to give Caitlyn’s mother a stronger personality. She was never fully developed in the first two books.

Every writer has to try different ways to be organized. I’m glad I tried both and sometimes it is a combination of ways that fits. Whichever way you decide to write, enjoy the process.
Posted by Mary Nunn Maki at 11:36 AM No comments:

Samantha was easy to work with, provided a list of questions, and was very flexible with my publishing schedule. She is looking to feature authors and their blog posts, even recipes. Check her blog out, and consider sharing a blog with her.

While marketing Fatal Dose, I am developing an outline for my next book with the working title, The Missing Waterman.

Through this process, I have learned that what I love about writing is developing the different characters, describing the setting, and then bringing it all to life.

Fatal Dose and An Unexpected Death can be found on Amazon under author M.E. Maki. And Amazon reviews are always welcome.
Posted by Mary Nunn Maki at 10:27 AM No comments: 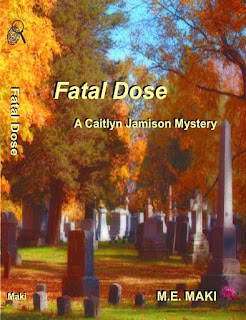 Graphic artist Caitlyn Jamison is back in scenic Riverview, New York, working on a winery photo shoot—and hoping to reconnect with Sheriff Ethan Ewing. But the sheriff has a serious situation on his hands: an undercover agent posing as a professor disappears on the same morning a college student is found dead. When Caitlyn learns the missing man is her friend’s uncle, and against Ethan’s wishes, she insists on helping with the investigation.

Meanwhile, Caitlyn’s Aunt Myra hears about a different kind of mystery from her friend, retired teacher Verna Adams. Verna is searching for her long-lost brother, who once lived on the abandoned road where the student’s body was discovered. As Riverview’s town historian uncovers the unsettling truth about Verna’s brother, Caitlyn and Ethan defy the town’s officials and keep their investigation going—with dangerous consequences.

Fatal Dose is the second book in the Caitlyn Jamison Mystery Series. The stories are set in the Finger Lakes Region of Upstate New York, and the book covers are by local photographers. The first book, An Unexpected Death, has a cover featuring vineyards on Seneca Lake by photographer Richard Welch. The cover of Fatal Dose is of Grove Cemetery, Trumansburg, New York by Ithaca photographer Joseph Scaglione, III.

Both Caitlyn Jamison mysteries have interesting subplots, and current social issues are worked into the plot lines of both books.

Fatal Dose can be ordered through Amazon.com.

Good Books are Fueled by Passion

This weekend I attended a University of Mary Washington Great Lives lecture at our branch library. The author, Marc Tyler Nobleman, was a powerful speaker, an accomplished researcher, and with an insatiable curiosity. The passion that fuels him is superheroes. Specifically, Superman and Batman.

In his book, Bill, the Boy Wonder, Mr. Nobleman debunks the story that Bob Kane alone created Batman. In fact, it was Bill Finger who was the creative and writing force behind Batman and the spinoffs. Mr. Nobleman writes:

When Batman was first written, one name was attached to his creation: Bob Kane. Bob's name appeared in every Batman comic, without any other creator noted. However, this is not true. Bill Finger, a Depression-era, New York resident, had a lot to do with it, too. In fact, according to Marc Tyler Nobleman's breakthrough biography Bill the Boy Wonder:The Secret Co-Creator of Batman, Bill was responsible for the majority of the Batman persona we see today.

Through dogged persistence, Mr. Nobleman found Mr. Finger’s one descendant, and together they successfully appealed to DC Comics to add Bill Finger’s name in all future publications, movies, and videos.

Marc Tyler Nobleman started his presentation by saying, “Good Books are fueled by passion,” and I agree!