Murder Gets Even and Death in the Dune – by John Molino 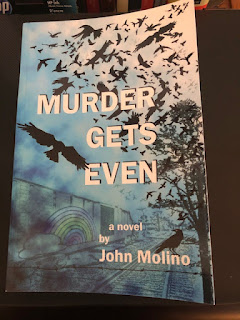 Similar to my experience – someone who never planned to write and publish a book, one of my neighbors, John Molino, has done just that. He develops the most interesting plot lines and characters. His first book, Murder Gets Even, published in 2018, is a fascinating story set at Cameron Station Military Installation in Alexandria, Virginia in the Summer of 1970. Colonel Fleming Andrews is the kind of character that you love to hate. Mr. Molino crafts this character, as well as the others in the book, so that the reader is drawn into them, and the story line. The story grips the reader and won’t let go until the last word is read. 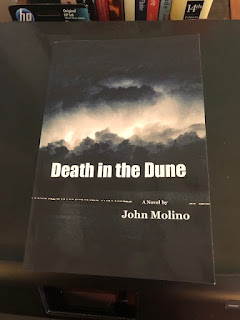 When John finished Murder Gets Even, he said that was it. One and done. But a year later he comes out with another cleverly crafted story, Death in the Dune. The story begins in 1617 Virginia Settlement with an unfortunate incident, but by the second chapter it is present time and the Dune, located along the Chesapeake Bay is up to it’s old tricks. The dune is located as a barrier between the bay and a condo complex where retired Commodore Bob keeps a watchful eye from his “lanai.” It is he who notices the change in the dune, and warns his neighbors. They, along with the authorities, listen to Bob with much skepticism and wonder about his mental faculties.

John Molino is a gifted storyteller, and I await his next book – next year, John?

Posted by Mary Nunn Maki at 5:17 AM No comments:

Email ThisBlogThis!Share to TwitterShare to FacebookShare to Pinterest
Labels: Cameron Military Installation, Death in the Dune, John Molino, Murder Gets Even, Virginia

The National Novel Writing Month officially began on November 1, but it is not to late to get started on the book you always wanted to write.

The goal of NANWRIMO is to get authors in the habit of writing every day. Write a little; write a lot, but just write. Work on your story.

I'm part of the NANOWRIMO Rebel group. I found that on most days I can't make the 1,167 word limit that would get me over the finish line of 50,000 words for the month. Life interrupts. NANOWRIMO Rebels still write every day, but the goals are much more attainable. We all need that feeling of success.

I'm working on a suspense story now. I am also in a memoir (life stories) group at the library. I have other things I'm involved with. And, I want at the end of each week to not only meet my goal, but exceed it.

This year for NANOWRIMO I set my weekly word count at a conservative 3,000 words. I barely made it this week. But I did and more. Another goal is to compose a new life story piece, which I have not done. Yet. Maybe I can squeeze that in at the end of the day.

Good luck with whatever you are writing. And remember, it is important that you get into the habit of writing, get into your project, and in time, finish it.
Posted by Mary Nunn Maki at 10:09 AM No comments:

The Death of Cassie White news


Several readers have asked, "Are your books in large print?" The answer, unfortunately, was, "no."

I hated seeing the disappointment on readers' faces, so I asked Kindle Direct Publishing. The response came right back, "Yes. There is a little box in the set-up page that you have to check." The book has to be reentered and assigned a new ISBN number.

I was so excited. I immediately reformatted the text and my cover designer offered to redo the spine width and not charge me any more.

So The Death of Cassie White, the newest Caitlyn Jamison Mystery is now in Large Print!

Email ThisBlogThis!Share to TwitterShare to FacebookShare to Pinterest
Labels: Large Print, The Death of Cassie White

Why I Don't Use Goodreads

This is a frustration post, so feel free to disregard. I just don't understand why the Goodreads website has to be so darn difficult.

On my marketing schedule today was to add my new book, The Death of Cassie White to the Sisters in Crime website bookshelf. I got that done in no time. Next on the list was to add the book to my author page on Goodreads. I can't say how long it took to figure out how to add the book, but I finally clicked through enough (over and over again) to find the new title page. Unfortunately, when I did that, I missed the very small print at the top right that said upload image. I filled out all the required boxes and checked the box - I am not a robot.

The entry appeared but with a plain cover. I tried over and over to find where I could upload the cover. No obvious place. Again, I just circled around. Went to YouTube, and that is where I learned about the small print wording. Went back in, but can't get to that unless I upload the book, but can't do that since it is already uploaded - sound like a Catch 22?

I went to their question section. Again, no help. Most advice had to deal with how you CAN'T change cover photos.

If anyone has the secret answer - please let me know.
Posted by Mary Nunn Maki at 12:18 PM No comments: